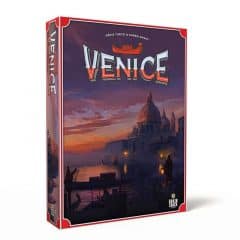 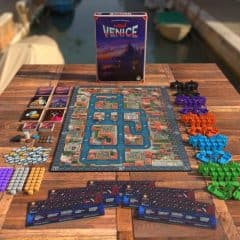 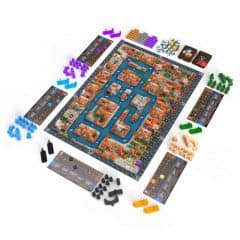 Venice lets players take the role of wealthy, influential merchants as they ride their gondolas up and down the city’s canals, train their assistants, complete contracts, and leverage their influence to gain political power.

Venice lets players take the role of wealthy, influential merchants as they ride their gondolas up and down the city’s canals, train their assistants, complete contracts, and leverage their influence to gain political power. But business is anything but usual. As they broker contracts and flirt with crime, merchants must avoid arousing the suspicion of the Venetian Inquisition, lest they find themselves arrested and their businesses shut down.

COMPLETE CONTRACTS – Load your gondolas with goods to complete missions, carefully optimising both your boats to ensure you can outpace your rivals.

ENHANCE WORKERS – Docking at buildings allows you to advance assistants up the career ladder. The further they climb, the more they can do – but will also push up any assistants that got there first!

PERFORM COMBOS – As long as you can afford it, your gondolas can keep moving – and will activate each of your assistants as they pass by, creating satisfying combos that reward advanced play.

BUILD BRIDGES – Venice’s iconic bridges make travel cheaper for everyone, but deal out coins for you – and Intrigue for everyone else.

AVOID ARREST – Intrigue is gained if you pass by others too often, and by performing illicit actions. Intrigue can help your political career – but at game end, the player with the most will be arrested, and barred from victory.

PLAY IT SOLO – No one to play with? No problem! Venice comes with a special deck of solo cards, so you can test your wits against the Doge – the nefarious ruler of Venice! 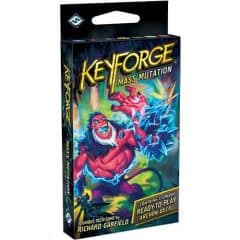