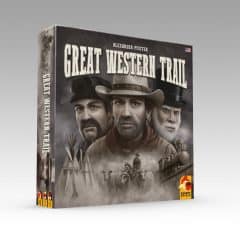 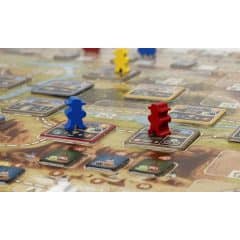 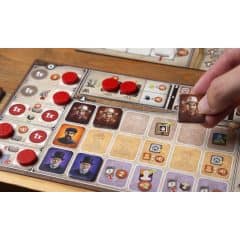 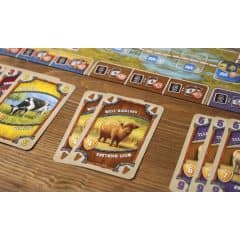 Set in a time in the 19th century in America, the players in the board game Great Western Trail try to breed cattle and try to drive their most valuable cattle from Texas to Kansas City.

Set in a time in the 19th century in America, the players in the board game Great Western Trail try to breed cattle and try to drive their most valuable cattle from Texas to Kansas City. There they are to be sent west by train. It is important to use the buildings along the way sensibly and it is always worthwhile to employ cowboys, engineers and craftsmen. Good timing is required here and it remains exciting all the way.

For two to four players aged 12 and over, this board game is from Egger games and Pegasus games.

The game consists of 3 phases:

Phase 1: You move the drovers along the path to a new location and can take at least one step and up to the step limit at most. If you want to cross a place with green or black hands, you have to pay money. In addition, a player must stop in Kansas City.

Phase 2: With the reached locations you use the existing actions of the buildings if they are neutral or belong to another. If you stand on another player’s building tile, tip tile or danger tile, the player carries out a relief action. To get money for his cattle, a player takes his steps in Kansas City.

Phase 3: The third and final phase only serves to draw your hand cards up to the hand card limit.

There are local actions, delivery actions and immediate actions to deal with. If there is talk of discarding a card, then this is played face up from your hand and onto the discard pile. If one speaks of taking a dollar, then one takes the amount from the bank and the bank pays out an amount when it speaks of paying a dollar.

The certificate marker is moved forward on the own certificate bar and as much as fields are moved forward. It is important to know that the marker can never be moved further than your own speed allows. At the beginning of the game the temp is three. If you are talking about your own locomotive pulling forwards, then you do this along the track fields of the railway line.

If a player places a worker tile on the last space of the labour market, the game ends. If only worker tiles are left, then sub-phase 3 is skipped. Now every other player has to make his last move to move his drovers forward. Each player who now reaches Kansas City on his last move then makes the five sub-phases. When the last player has made his move, the game is over and the final scoring can begin. To do this, you take the scoring pad and go through the eleven scoring categories together.

The interaction between the other players is rather low, the course of the game is simple but, despite everything, a great strategy game. The rules at the beginning of the game may take some time, but the symbols on the cards make them more self-explanatory as the game progresses. Due to the complexity of the game, it can happen that it takes up to three hours.

But that doesn’t detract from the fun. At the beginning of the game you can still decide for the A or B side of the tiles, which creates a good variance. This game has little to do with luck or chance, because strategy is particularly important here and you often have to be able to rethink quickly.