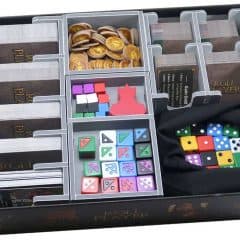 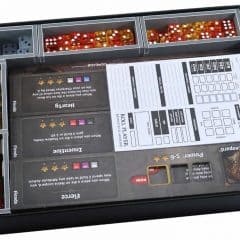 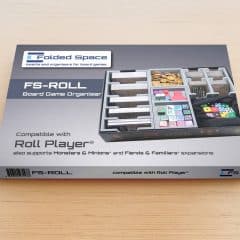 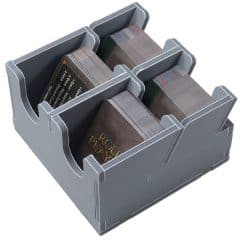 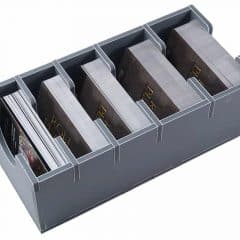 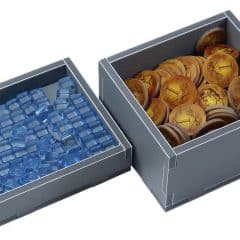 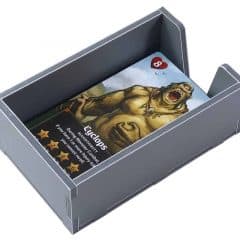 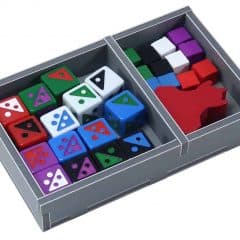 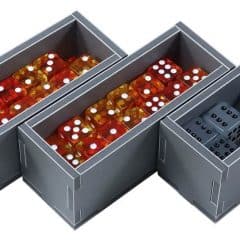 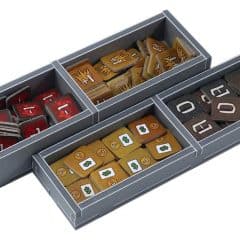 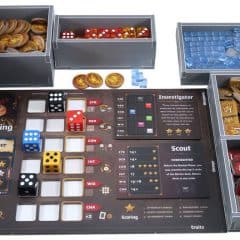 Insert compatible with Roll Player®, and Monsters & Minions® and Fiends & Familiars® expansions. The design provides both efficient storage and improved game play. Many of the trays can be utilised during the game, and they greatly aid set-up and clear-away times. The standard game dice are stored in the dice bag as shown.

The insert is arranged in either in two separate layouts in the retail box plus one expansion box, or alternatively all together in the Big Box variant.

The trays in the middle of the box are arranged in two layers, with the monster card and XP cube trays on the bottom layer.

The insert trays store all the game components and non-standard dice. The card trays have space for all cards to be sleeved with quality sleeves.

If you own the Big Box variant of the game, the two sets of trays are simply placed one on top of the other.

The trays work equally well with the metal coins and the lenticular monster cards, which can be sleeved. There is also space for the six cards from the lockup pack. You can add the minotaur and frogkin player boards too, but you will have 1-2 mm of lid lift, which is hardly noticeable with this kind of box. The tokens from these additional boards fit fine in the relevant token trays.

When packing the box, the last thing to add are the three rule books. These go either in the expansion box (as shown on the left), or on top of all the trays in the Big Box (as shown on the right). Once fully loaded all three box types are filled to the top, allowing for vertical storage.

This product consists of a flat-pack of 5 Evacore sheets. The trays require assembly, which is quick and fun, using ordinary PVA glue. Detailed instructions are included in the package.