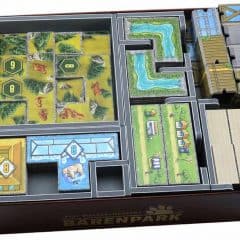 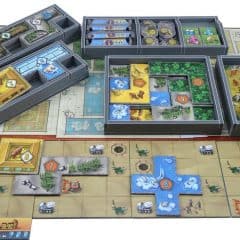 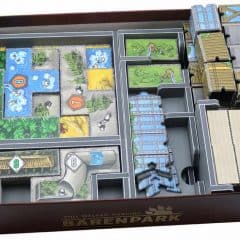 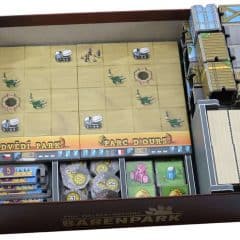 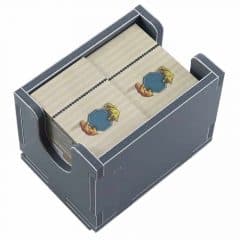 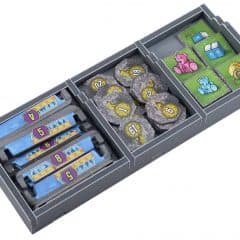 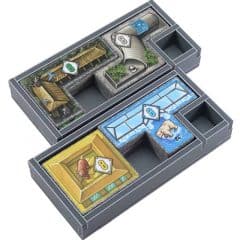 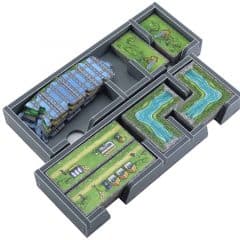 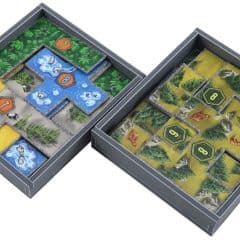 Insert compatible with Barenpark®, and The Bad News Bears® expansion. The design provides both efficient storage and improved game play.

Insert compatible with Barenpark®, and The Bad News Bears® expansion. The design provides both efficient storage and improved game play. Many of the trays can be utilised during the game, and they greatly aid set-up and clear-away times. The trays are arranged in three layers.

Note that when full packed the box lid will lift by 9 mm. Please see below for more information on this. Also note the stack of 23 monorail towers on the top right of the images.

There are trays for all the game tiles and components. All the zoo tiles have their own slots in the trays, making organising the game easy. Note that five of the monorail towers need to be stored open and flat in one tray, with the remainder stored assembled and stacked as shown in the images above.

FS-BPARK is unusual for Folded Space’s inserts in that some of the boards need to be stored on the bottom layer over-lapping the lowest layer of trays. First place the square park areas, followed by the four areas with exits, and then the four areas with entrances. Then add the remaining trays on top, with the supply board on top of the upper layer of trays as shown. These are followed lastly by the rule books. Once fully loaded the box is filled to the top, allowing for vertical storage.

As mentioned above, when fully loaded the box lid will lift by 9 mm. However, due to the colours on the box base this lid lift is not very noticeable.

This product consists of a flat-pack of 3 Evacore sheets. The trays require assembly, which is quick and fun, using ordinary PVA glue. Detailed instructions are included in the package.