As we begin to open our gaming groups again we started thinking about which board games are perfect for groups of three or more people.

The Quacks of Quedlinburg 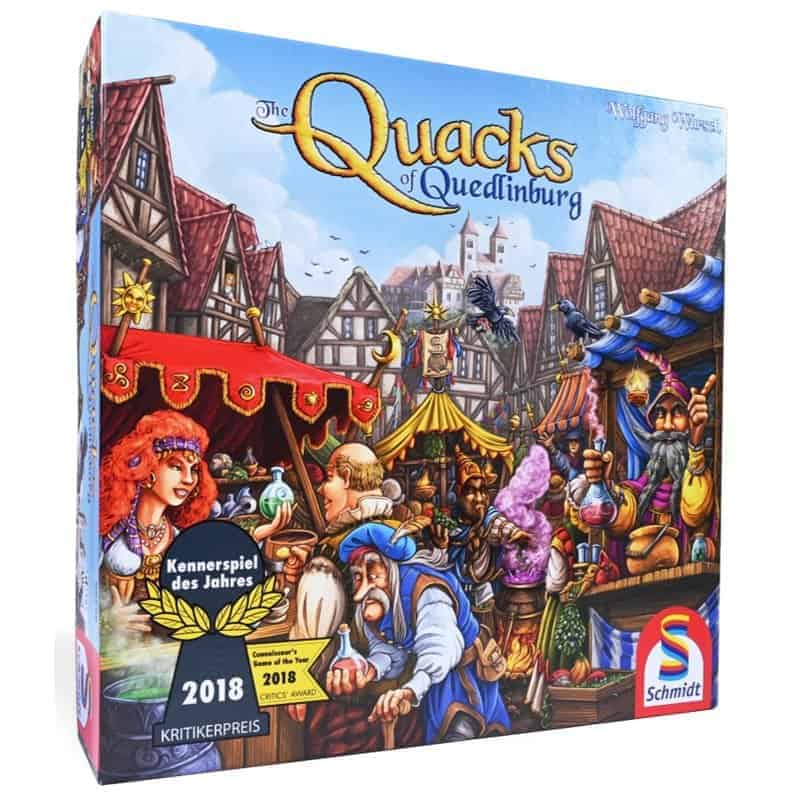 You are each playing ‘quack’ doctors in the German town of Quedlinburg, selling potions for all ailments to the townsfolk.

Mix the potions in your cauldrons by drawing ingredients from your blind bag in this push your luck, bag building game.

Chaos and hilarity will ensue as you taunt the other players into drawing just one more ingredient to add to their pot. If they draw one too many white ‘cherry bombs’ to add to their potion it will explode and their round is over.

Although this games works well at any player count the more the merrier is great for a raucous board game night.

Rajas of the Ganges 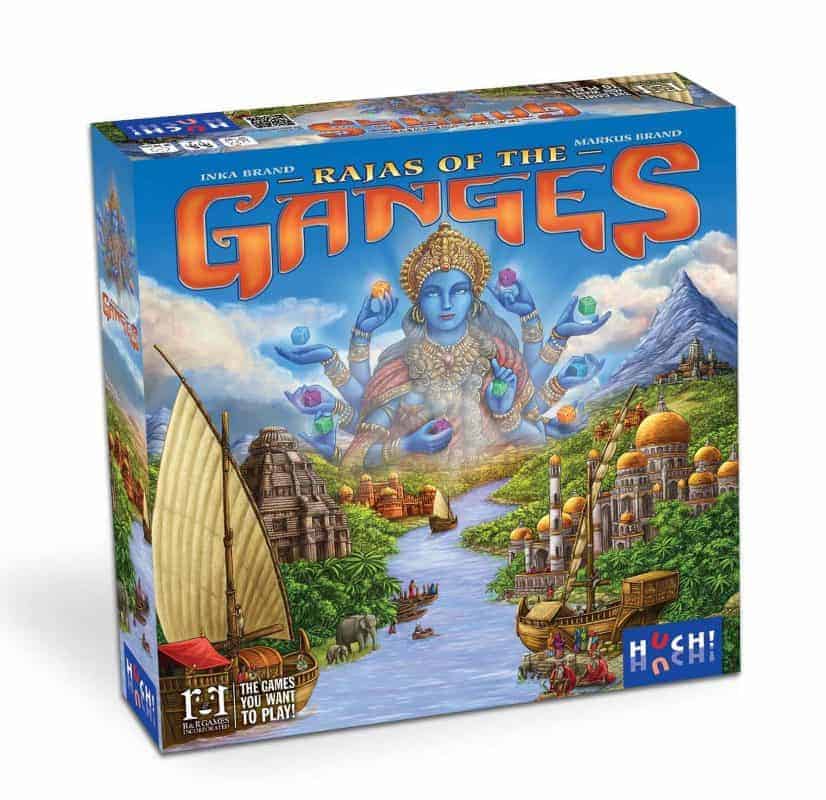 Although this is a worker placement and dice drafting game we believe it is at its heart a racing game.

Drafting your dice and placing your workers to use the dice for their abilities your main goal is to get your markers on the points and fame tracks to meet. The first player to do so will win.

Not restricted to any number of rounds you can work your strategy based on the dice rolled and how you use them.

You’ll be buying tiles to build roads. Buying and selling goods. Sailing up the Ganges for bonuses. Even using the nobles for their powers.

This is a fantastic game with so many ways to gain points on both tracks and the more players involved the more competitive the game is. 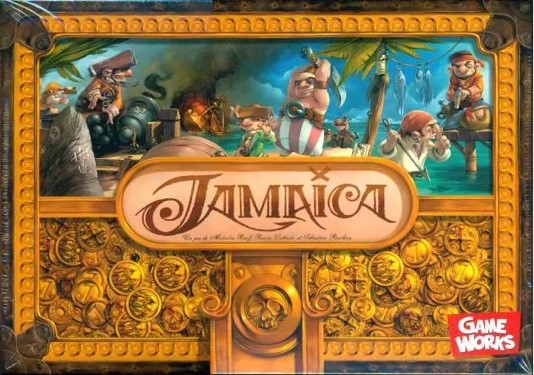 Yo-ho-ho! Jamaica is the ultimate pirate themed racing game as you make your way around the eponymous islands.

Roll two dice and choose one for day and one for night actions. Then simply select a card from your hand based on the day and night actions on them and carry them out based on the pips on the respective die face.

First person around the island triggers the end game and the pirate, sorry, Captain with the most booty wins.

Get some sea shanties on and you’ll soon be sailing, pillaging and firing the cannons on your fellow players in this superb game.

A must for any game night. 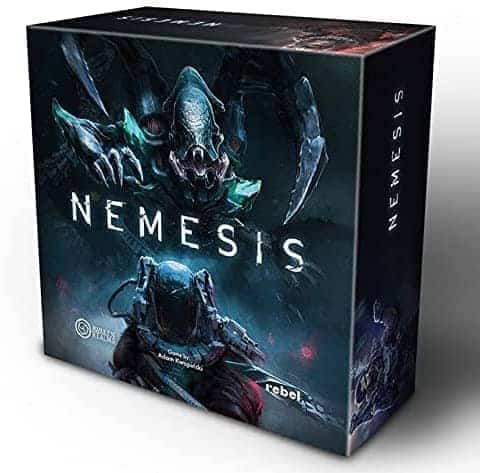 Nemesis is a 1-5 player space survival game with incredible miniatures and clever, immersive rules that include cooperation, bluffing, backstabbing, and all other elements of an iconic science-fiction horror adventure.

Playing Nemesis will take you into the heart of Sci-Fi survival horror in all its terror. You will adore the components if you are a fan of miniatures, in fact ALL of the components are stunning!

Intruders you meet on the ship are not only reacting to the noise you make but also evolve as the time goes by. The longer the game takes, the stronger they become.

Can you guide the ship to earth before it is beyond repair and explodes?

Will you get to a hibernation pod before the ship jumps to hyperspace?

Can you survive the hidden alien invaders lurking in the shadows?

Work together with repairing the ship, objective completion and survival from attack or contamination to win the game.

Sci-fi mood music and snacks are the order for this game night experience. 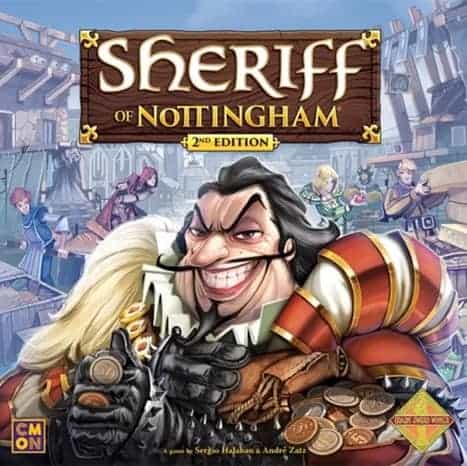 Step into the shoes of merchants and traders in the fair city of Nottingham.

All you want to do is take your bag of wares, set up your stall and make a profit.

However, standing at the city gates is the Sheriff himself. He has been made aware that some merchants have been sneaking in contraband items which have been turning up in the city as of late.

It is up to you to convince the Sheriff that you are honest and hard working. Never to deal in illegal goods.

Each round a different player takes on the role of the Sheriff, questioning the incoming merchants as to the contents of their bag. Pay the tax to the lawman to be let through, bag unchecked. Offer to pay him to let you through, but check the bag of another merchant who you believe may not be telling the whole truth.

But be aware that if he opens your bag and you weren’t completely innocent and you’ll have to pay the fine with claims of “How did that get in there?!”

However if you were telling the truth he will have to pay the fine costs to you!

Bluffing and hilarious role playing will make for a perfect game night. 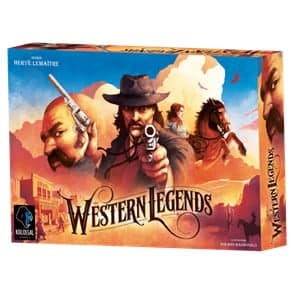 You can be a law abiding sheriff, ridding the west of those pesky outlaws while having a penchant for the odd poker game. If temptation is too strong to turn to a life of crime you can throw away your badge and rob a few banks.

Why not wrangle yourself some cattle while staying on the right side of the law or even prospect some gold?

This game is huge, in depth as well as in table presence and taking up to six players means that you will have to stretch your efforts to be remembered in the history books.

The characters in this game are taken from real life history makers adding a touch of realism to your gaming experience.

This is one of the most immersive games out there, but be prepared to put a few hours aside! 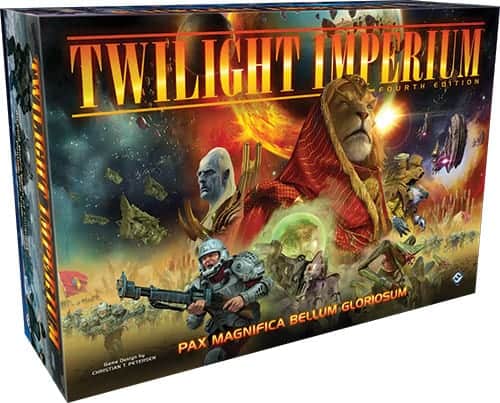 Talking of legends we end with one of the most legendary board game experiences available today.

Now in its fourth incarnation, Twilight Imperium completely lives up to its reputation and beyond.

Each player takes command of one of seventeen unique civilizations to compete for interstellar supremacy through warfare, trade, uncertain allegiances, and political dominance.

Every faction offers a completely different play experience, from the wormhole-hopping Ghosts of Creuss to the Emiratates of Hacan, the masters of trade.

An alliance made with a fellow player in round one can be completely broken in round four as you have no further use for them. However they may have made a secret alliance with another player, just waiting in the background in case you inevitably turn.

Battle, negotiate and trade your way through the galaxy where all of the races have many paths to victory, but only one will sit upon the throne of Mecatol Rex as the new masters of the galaxy.

This is a board game your group will want to play again and again, making for one of the most diverse experiences out there.