If you are attracted to stunning production values, epic narrative, and boundless possibilities in your tabletop games, then you might have been tempted to pick up the gaming touchstone Dungeons & Dragons, or Pathfinder with its more lively art style, or Fantasy Flight’s whole trilogy of Star Wars games (Edge of Empire, Age of Rebellion, and Force & Destiny) that each look like they had a movie-sized budget spent on them. I certainly was and couldn’t resist collecting them. But for a long time they sat neglected and stiff-spined on a shelf as I rarely found groups to play them with. Then about a year ago I began solo roleplaying and now my many tabletop RPGs are more at risk of wear and tear from overuse than of gathering dust.

It was after a couple of years of playing board games that lent themselves more easily to soloing (such as Pandemic Legacy with its cooperative design, or Mansions of Madness with its companion app) that I decided to stop procrastinating and just have a crack at solo roleplaying! I pulled my D&D Essentials Kit off the shelf, opened up the excellent ‘Dragon of Icespire Peak’ adventure, and have never looked back. The early death of Donnabella Fiasco (one of the ‘sidekick’ characters supplied in the Essentials Kit) is as vivid for me as any moment in games I’ve played with real groups. I also remember the sweet taste of the real-life celebratory ale when, half a dozen or so solo games later, Curnock the dwarf took vengeance on the murderous manticore responsible.

There are a few things you will need to make the solo approach work, aside from the core books of whichever game system you want to venture into and its prerequisite dice and tokens:

Why do I need a published adventure?

In this style of solo play, pre-written adventures can be experienced as somewhat linear choose-your-own-adventure books. Depending on their style (and that does vary widely between titles) they will usually provide scene-by-scene narratives of a coherent adventure, with convenient stat blocks for encounters as they come up. You have to remember that the adventures are written with a traditional gamemaster in mind, so there will inevitably be spoilers and information that the players shouldn’t strictly know, but I find when that happens it doesn’t diminish the experience and almost every scene comes fresh anyway, which would be difficult if writing the adventure yourself.

‘Dragon of Icespire Peak’ from the D&D Essentials Kit was the perfect starting point for me. It is structured enough that the book does the heavy lifting on storytelling while you get used to the game system, but flexible enough to allow you to enjoy the freedom that is part of the joy of roleplaying. In my solo campaign, a key location was burned down before the party ever visited it, due to some unbelievably-unfortunate dice rolls in social interactions elsewhere. 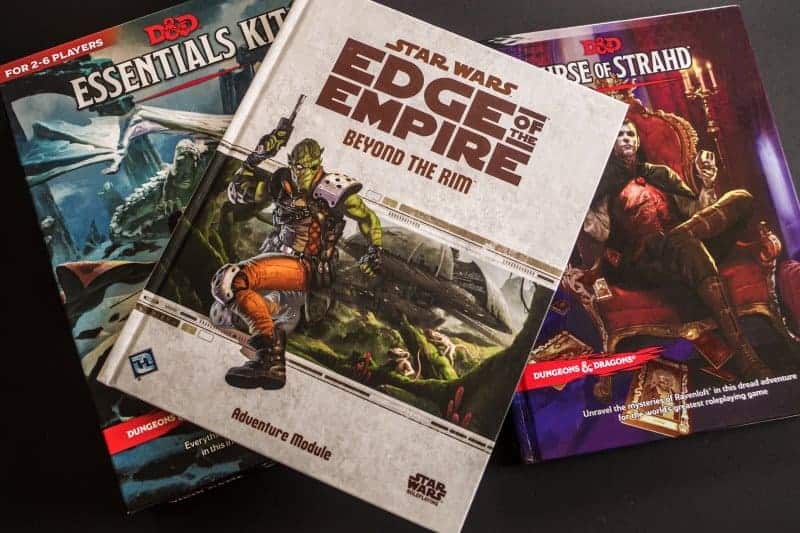 If I’m playing solo, can I just play one character?

You can but you probably won’t get very far. Most published adventures are balanced for big parties of four to eight players. Even scaling the encounters down doesn’t always work because generally one character won’t have the range of abilities or skills needed to succeed in a well-written scenario. However, the cognitive load of trying to run half a dozen characters yourself takes away from enjoyment of the game, so I tend to run two at a time and either give them some extra starting equipment or start them a level above the recommendation for the adventure.

What’s this extra D6 for?

Sometimes a situation can arise when solo RPGing that requires a detached decision to keep the game interesting, rather than just deciding according to our own bias. For example, blasting through the door rather than finding the key card is definitely quicker but does it attract attention? The extra die is ‘The Oracle’. For a full explanation from the source where I first came across this, read here https://homebrewery.naturalcrit.com/share/rkmo0t9k4Q but at its simplest, The Oracle will answer Yes/No questions and a little more.

Me: “Did that attract attention?”

4 – Yes, but… you have some time before they get here.

2 – No. Nobody is monitoring sensors in this area.

1 – No, and… all locks in the area release as the system short circuits. 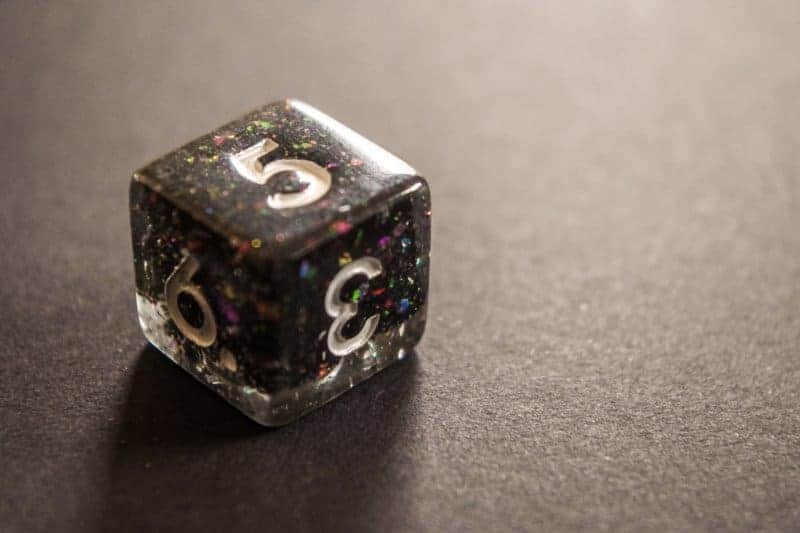 Any D6 will work as an Oracle. I use one with a sci-fi feel to it for Force & Destiny.

And the pack of cards?

Cards are great for creating some sense of surprise and mystery when solo roleplaying. For example, in one of the ‘Dragon of Icespire Peak’ scenarios, you must rescue the rancher Big Al from his farmhouse that has been overtaken by raucous orcs. As written, the solo player would know from the adventure booklet exactly which room Big Al could be found in.

To maintain some tension and surprise when playing solo, I used playing cards to randomise which room he would be in. With eleven possibilities on the map, I took ten number cards and a king card and shuffled them. Every room my party entered, I would draw and discard a card. When I drew the king, that was the room with Big Al. 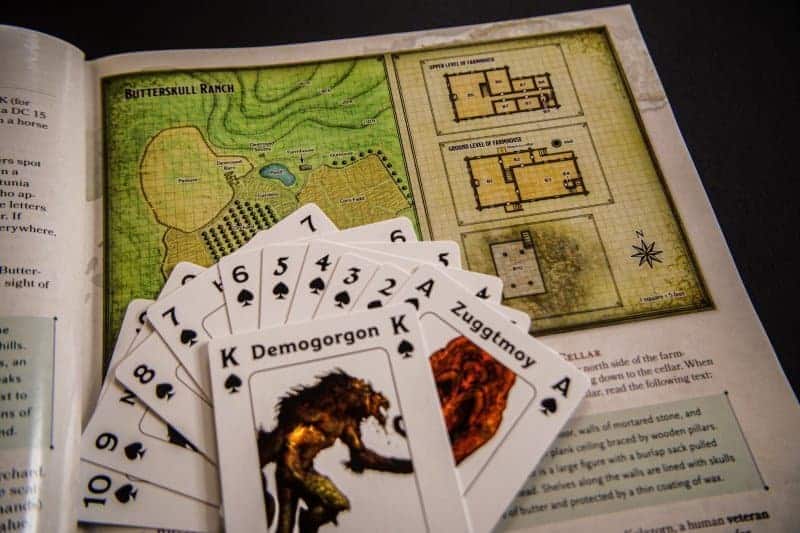 Here, the ‘king’ card simply represents which room the prisoner is kept in, but this themed deck could also be used to randomly generate monster encounters.

The journal is for keeping track of equipment and quest information, right?

Partly, but it’s obvious that the key thing missing from solo roleplaying is making those memorable moments with friends when something surprising, or comical, or heartbreaking occurs thanks to either the mechanics of the game or players’ creativity. Where a gamesmaster or player would narrate something significant, I try to note a few lines in the journal. Often what this means for me is that a page where I’ve been tracking combat will be surrounded with macabre annotations; “decapitates both cultists with one mighty axe blow and quips ‘two heads are better than one’” or “misses with lightsabre but raises other hand to force-push them all over the edge into the exhaust shaft, tinny screams escaping their helmet comms”. 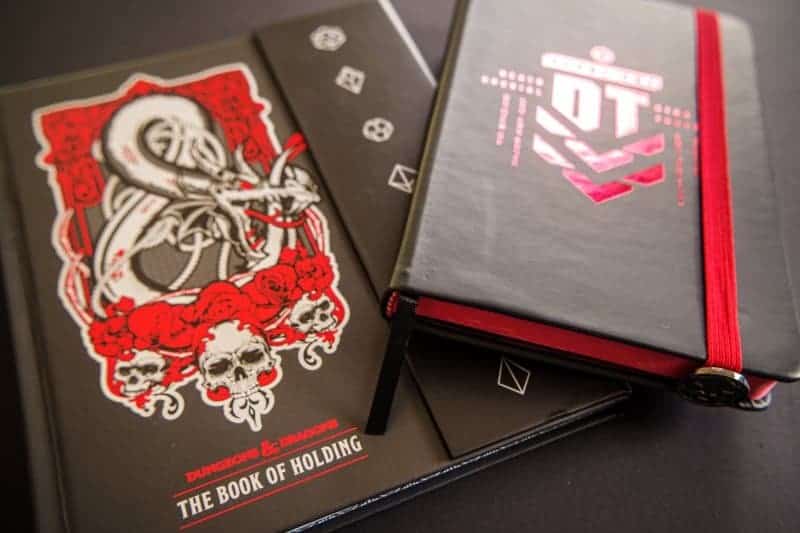 The pages of your notebooks will quickly become detailed histories of your party’s adventures.

I always try to pick a notebook that fits the theme of what I’m playing, to help with immersion. I want them to become part of the fabric of the game. I hope to be running the same characters in thirty years and be able to flick back through those old journals and recognise formative moments. The difference, having discovered solo roleplaying, is that I fully expect those notebooks to be full. I expect the rulebooks to be battered, the pips of the dice to have rubbed off, and my character sheets to be as worn as old money, because with solo roleplaying every day can be a game day.